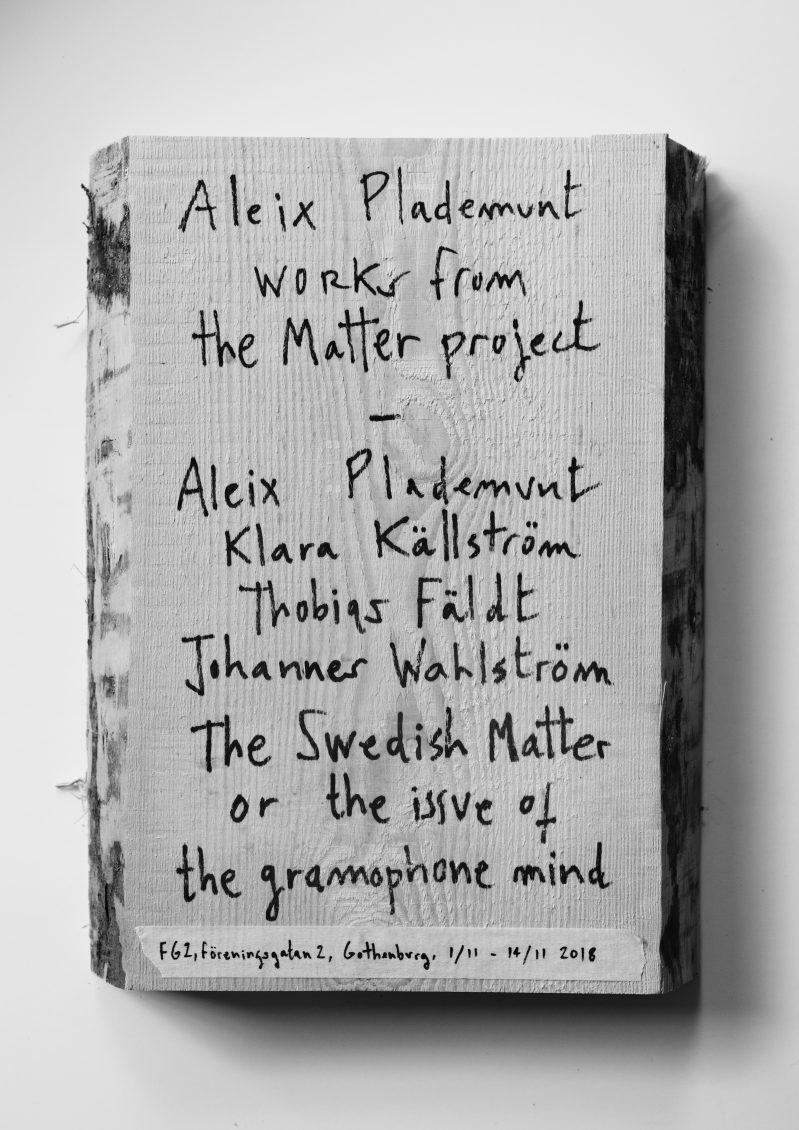 Aleix Plademunt, Klara Källström, Thobias Fäldt and Johannes Wahlström
The Swedish Matter – or the issue of the gramophone mind

In production with Per Nadén, Hanna Jacobsen and Barthélémy Garcia

FG2 presents its second exhibition at Föreningsgatan 2 in Gothenburg
Opening: Thursday 1 November at 18:00
(Aleix Plademunt in conversation with Niclas Östlind and participating artists)

Since 2013, Barcelona based photographer Aleix Plademunt has been working on MATTER, his most extensive photographic project so far. Deriving from mater, the Latin word for mother, matter refers to the substance from which all things are made. In English, the word matter can also indicate importance or significance – something to be concerned about. Matter itself is inert, without motion, unable to reproduce. But it leads to life. The Big Bang’s radical expansion created everything. During its life cycle, an organism undergoes many changes – it grows, learns, evolves and dies – but matter always remains. Matter is a constant. It was there from the beginning and it will remain long into the future. Humans emerged from one of the most recent evolutionary alignments in space and time. We have endeavoured to dominate and transform matter. Nevertheless, evolution is such a complex process that one can easily forget that it is only possible thanks to the precise imitation of original processes. The MATTER project analyses the age-old question of existence and how it pursues our origin.

FG2 (i.e the collaborations at Föreningsgatan 2) takes the starting point in an artist’s already existing body of work and finds its way through further investigations. For the occasion of Plademunt’s visit to Gothenburg, the trees in the MATTER project form a central role. A few years ago, Plademunt visited Sweden to take a photograph of the oldest tree on earth, a small pine on Fulufjället in the county of Dalarna. The Swedish Matter is the result of bringing MATTER into a specific historical and geopolitical position, of letting matter speak through it’s bare existence. The presence of a tree, both as a physical witness and/or in the shape of a safety match, reminds us of a Swedish history inseparable from the material of which it is inscribed.