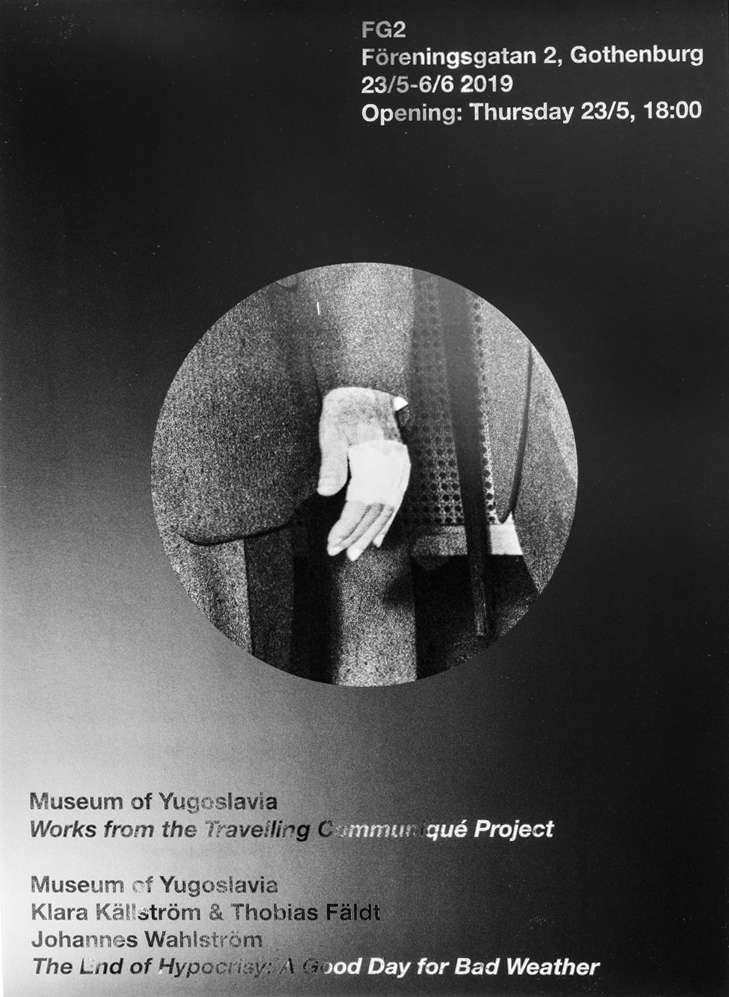 In production with Per Nadén, Barthélémy Garcia and Fabian Reppen

FG2 presents its third exhibition at Föreningsgatan 2 in Gothenburg
Opening: Thursday 23 May at 18:00
(Jovana Nedeljković and Radovan Cukić in conversation with Niclas Östlind and participating artists)

The transdisciplinary exhibition Travelling Communiqué was first shown at the Museum of Yugoslavia (MoY) in Belgrade in the summer of 2014 and it examines the role of one of the most important photographic archives of the 20th century, the archive of the cabinet of the life-long president of the Socialist Federal Republic of Yugoslavia (SFRY), Josip Broz Tito. It was the first and most extensive project ever made taking the photographic archive of MoY as it’s point of departure including more than sixty works by forty authors from thirty-two countries created in various media: video essays, photographs, collages, photo walls, films, articles, lectures, documentary material.

The project was developed as a collective work by Armin Linke (Germany/Italy), Doreen Mende (Germany) and Milica Tomić (born in SFRY), in collaboration with the MoY team of curators (Radovan Cukić, Ivan Manojlović, Mirjana Slavković)

In May of 2019, the Travelling Communiqué exhibition will be shown in selected parts as a collaborative project between Museum of Yugoslavia and FG2.

The photographic archive of MoY encompasses the work of four photographers employed at the Cabinet of President Josip Broz Tito. Their cameras captured the activities of the former President from 1948, until his death in 1980. The Travelling Communiqué project points to the link between photographic protocols and the political network of a statesmen, or rather, the issues arising from the use of photographs as a means of legitimizing relations of (political) power. It addresses questions between photographs and political practice in socialist Yugoslavia and if a photograph then becomes an equal instrument of that political idea, on a level with political speech? The Photo Archive of Josip Broz Tito is the result of a collaboration between MoY’s curators and the Travelling Communiqué project, with the aim of offering a new way of interpreting, as well as a possible direction in analyzing the role of the photographic archive of Josip Broz Tito.

At the invitation of MoY, Klara Källström and Thobias Fäldt have gone through the archive in search of the one and only travel that President Tito made to Sweden. In addition to the eight journeys surveyed in the Travelling Communiqué exhibition, Källström and Fäldt explore the photographic material from the occasion when President Tito met with Prime Minister Olof Palme at Hagaparken in Stockholm in 1976. Through a comparative analysis of the photographs from Hagaparken found in the photographic archive of MoY and present time’s digital remains after the meeting, the search results extend well beyond the Cabinet’s control. The most searched-for information on the events in the park seem to concern a small incident with President Tito’s hand, an accident where his hand happens to be in the way of a closing car door. If search hits from the web are to be considered as a form of archaeological remains, the causal effect of what is left from the meeting is then a clamped limb.

In the FG2 exhibition and through the words of writer Johannes Wahlström, the injured hand in cropped format serves to ponder the strata of hypocrisy; once a theatrical act, subsequently turned into an age that finally sees its’ own end – an end that proves to be a great day to talk about the weather.